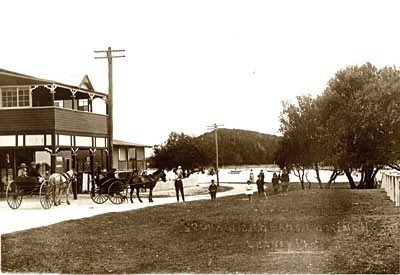 Originally inhabited by people of the Bundjalung nation, the Brunswick River was charted by Captain Rous in 1828.

His visit was followed more than 20 years later by cedar cutters whose activities led to the first town in what is now Byron Shire. By the 1880s Brunswick Heads was a busy port and a robust little commercial centre.

The township went into decline after the construction of the railway through Mullumbimby in 1894. However, in time, Brunswick's popularity for family seaside holidays returned, and from the 1920s onwards its fame spread far and wide. Holiday cottages from that period are still evident throughout the town.

The early camping grounds along the foreshores later became caravan parks and are  the comfortable holiday parks we know today.

People from many indigenous tribes of the Bundjalung nation are said to have an association with the area now known as Brunswick Heads. The Brunswick River Valley was the territory of the Du-rung-bil people. The Bumberin tribe is said to have inhabited the area around Byron Bay, recognised now as Arakwal territory.

Brunswick Heads was considered a place of significance for the Aboriginal people - and a meeting place for ceremonial and trade purposes. There was a steady source of food such as dugum (pipis), julum (fish) and other resources. Leaves from the foambark trees were also used to release poison, which caused the fish to float on the surface, allowing them to be readily taken.

Because of the regular tribal gatherings, middens are common, although sandmining from 1930 onwards destroyed many of these.  Middens are sites containing various types of seafood shells, the contents of which had been eaten by local people. These sites are protected under federal legislation.

Captain Rous named the Brunswick River after Queen Caroline of Brunswick in 1828.  The first Europeans to set up a permanent camp at Brunswick Heads were cedar getters Steve King and John and Edward Boyd in 1849. The cedar logs were rafted to Brunswick Heads, and the bullocks hauled the logs into the surf where they were then winched on board sailing ships. During the early cedar cutting days, the Aborigines were numerous and not the dangerous characters that some writers reported.

The only access to the outside world was by boat. Many ships bringing essential supplies were wrecked crossing the treacherous bar, including the "SS Brunswick" in 1883, the "Agnes" in 1889 and the "Endeavour" in 1892. The local Aboriginal people helped rescue the shipwrecked sailors.

The boat building industry developed because of the ready availability of a variety of rainforest timbers up river, and finished when the timber ran out.

The Brunswick River has three arms. The main arm rises in the hills above Mullumbimby. The North Arm is named Marshall's Creek, after Bob Marshall, cedar cutter and owner of the first Brunswick Hotel, opened in 1884. The South Arm is named Simpson's Creek after Captain Simpson and for a period around 1865 the town was called Simpson town.

The north side settled

Captain Simpson established the pilot station in the 1870's on Harry's Hill. Harry's Hill was named after Harry Houghton, who operated a ferry across to north beach. It was an important indigenous gathering site, known as Durrumbul (water rat). If viewed from the south side of the river, the shape of a water rat can be clearly seen.

The old village of Hainsville, a little inland, was named after Maria Hains, who built a small inn to cater for travellers waiting to cross the river at low tide. In the 1880's Hainsville had 3 hotels, several businesses and a school for 109 children. The village prospered from 1891 to 1894 while the railway line was being built.

Reading's Bay was once much deeper than it is today and was an anchorage for the schooners trading to the Brunswick River port. The wharf was at the north-east corner of Harry's Hill.

In 1974 Cyclone Pam devastated the coastal strip and the ocean breached the dunes north and south of New Brighton. The Byron Shire Council owned Sheltering Palms Holiday Cabins were swept away and a cluster of homes destroyed.

Before access was available to what is now known as Brunswick Beach, North Beach (now New Brighton) was the surfing beach and a popular picnic spot. Mr Farrugia's ferry service operated across the river, prior to the construction of the first bridge to cross the Brunswick River in 1934.

The footbridge over Simpson's Creek was built in 1937. The traffic bridge was not built until the 1960's when the Dept of Public Works needed to truck in the huge rocks, used to construct the south wall. This also gave access to the beach and the homes on the ocean side of the river.

The new highway and local bridge, built in conjunction with Pacific Highway upgrade works, was opened in 2007.

Following the destruction of the Byron Bay jetty in 1954, a decision was made to create a safe boat harbour in Brunswick Heads. Construction of the rock walls commenced in 1959. Prior to that there was a beautiful sandy foreshore extending from the kiosk (now the Housie Shed) over to the river. This was used as a landing strip for joy flight aircraft. At high tide it was the main bathing area at Brunswick.

A new poem by Frank Mills:

The Brunswick Visitor Centre stocks a range of historical books about the history of the Brunswick Valley and surrounding areas.

Or visit the Brunswick Valley Historical Museum on Fridays in nearby Mullumbimby.