Frank Mills has been telling stories about the Brunswick Valley his whole life. He's the keeper of the history and culture of Brunswick Heads. Frank was once the Tweed/Byron fire chief and is a well-known local historian.

In 2016 a new seat to honour Frank was unveiled. Situated under the Cypress Pine, in front of the Tweed Street IGA Supermarket courtyard, the new Frank Mills Seat embodies key elements of Mr Mills' colourful life.  Watch the video of Frank telling his colourful story here

And at 88 years of age, Frank has just penned a new poem about his beloved Brunswick Heads. 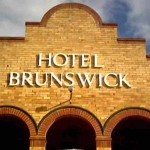 Overlooking the Brunswick River, with its beautiful outdoor beer garden, this is an iconic Australian pub.  Read more...